A key feature of the REPL is that it shows you the value of an expression right after you type it. Although this feature is great for explorative programming, it can be limiting when writing larger programs.

For example, you get spurious warnings with -Ywarn-unused enabled.

Also, you get a warning when writing companion objects.

Companion objects don't work out of the box because the REPL wraps each statement in a synthetic object. We can look at the generated code by adding the compiler option -Xprint:parser.

It's not possible for object User to be a companion of class User because they're defined in separate objects $line3 and $line4. This encoding is required for the REPL because we need to eagerly evaluate each expression as its typed. However, this limitation can be lifted if we know the entire program ahead of time, which is the case when evaluating all Scala code examples in markdown files.

Instead of using the REPL to eagerly evaluate individual expressions, mdoc builds a single Scala program from all code examples in the markdown file and evaluates them in one run. This approach is possible because we know which statements appear in the document. For example, consider the following markdown document.

This document gets translated by mdoc into roughly the following instrumented Scala program.

When Session.app() is evaluated, the mdoc instrumentation builds up a data structure with enough information to render the document back into markdown.

There are many benefits to using this approach over the REPL:

However, one challenge with the approach is that compiler errors point to cryptic positions in the instrumented code instead of the original markdown source.

It's annoying if compile errors show synthetic code that you didn't write yourself.

Ideally, we want compile errors to point to the original markdown source instead. 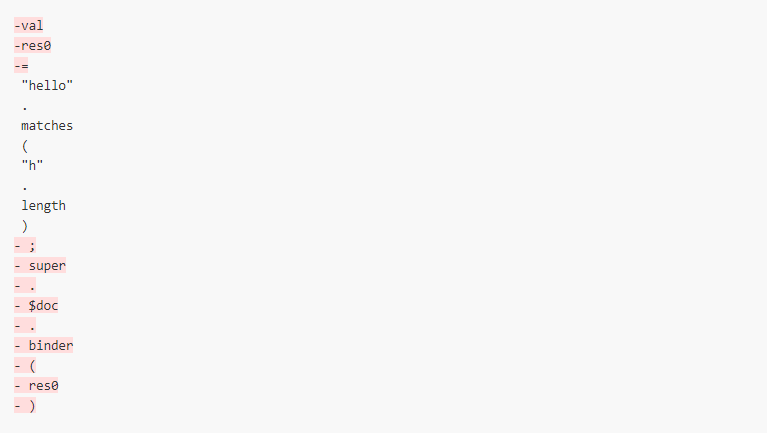 Edit distance is used by tools like git and diff to show which lines have changed between two source files. Instead of comparing textual lines, mdoc compares tokens.

As long as instrumented sections like $doc.startStatement() don't contain type errors, error messages reported by the compiler should translate to positions in the original markdown source.

Let's test mdoc by running it on the http4s documentation. Http4s is a minimal, idiomatic Scala interface for HTTP.

We start by cloning the http4s repository and install the sbt-mdoc plugin.

Next, we run a migration script to convert tut code fences into mdoc code fences.

Then we run sbt docs/mdoc and get a lot of compile errors.

It's expected that there are compile errors because mdoc uses program semantics instead of REPL semantics. For example, in this particular example meteredClient was already defined in this document, which is not a problem for the REPL but is invalid in normal programs.

We rename a few conflicting variables and comment out two ambiguous implicits.

We disable fatal warnings and run mdoc again but only for the modified document dsl.md.

It's faster the second time because the JVM has warmed up. After 6 iterations of adding blank lines and recompiling it takes 2.4 seconds to generate the document.

We introduce an intentional compile error.

Observe that the error is reported within one second, faster than it takes to process the document when it's valid. The position of the error message points to line 449 and column 41 which is exactly where year identifier is referenced. In some terminals, you can cmd+click on the error to open your editor at that position.

We compare the performance with tut by checking out the master branch and run docs/tutOnly dsl.md four times.

We introduce the same compile error as before.

Observe that it took 22 seconds to report the compile error, about as long as it takes to process the valid document. Also, the position points to line 458, which is the last line of the code fence containing the closing }, but it's is not the exact line where year is referenced.

Migrating from REPL semantics to program semantics requires manual effort. If you write a lot of documentation and want a tight edit/preview feedback loop, the migration might be worth your effort.

Several projects already use mdoc: mdoc itself (this website), Scalafmt, Scalafix, Scalameta, Metals, Bloop, Coursier, Almond and fs2-kafka. Those projects may serve as inspiration for how to integrate mdoc with your project.

See other articles by Ólafur